It’s getting dark. I’m sitting at my friend’s place, looking through the window, observing a small but busy street. It’s a little bit out from Hanoi and still the traffic is crazy! What you can see in documentaries about Vietnam is not an exaggeration at all. Even after seeing the whole series, you still won’t be prepared for this mess. Being in traffic in Turkey or Georgia is easy-peasy in comparison to Vietnam. In fact, nothing compares to this.

I didn’t have to wait long to experience the madness of the streets in this country. The company car picked me up from Noi Bai International Airport and within the first five minutes we almost crashed with a moped going in the opposite direction around a roundabout, not noticing our car on his way. Well, for sure here you can expect hundreds of situations that will get the adrenaline flowing. Driving a vehicle or even walking on the streets in Vietnam is a hazardous enterprise. The WHO report states that just during 2010 alone there were more than 20.000 fatalities caused by reckless driving. I myself saw three accidents within the first week in Hanoi. And after this first week together with Klara we bought a motorbike (Yamaha Nouvo 2006, 270$). Sounds reasonable right?

On one of my first days in Hanoi I went out with my friend. She was supposed to show me the way to some place. We got to the point where we had to cross a four-lane street. I was sure that she would show me how Vietnamese people do it with ease and confidence, but before I realized, she was already hiding behind me and peeping at the street with fear in her eyes. She said that although she’s been living here for 6 years, she still can’t get used to the traffic. I took her hand and led her across the street.

So how does it actually work?

Well, I guess before you decide to leave your shelter and go for a walk or use any vehicle, you should probably pray for a good luck, even if you’re an atheist. You should pray after as well and thank god you’re still alive 😉 To be honest it’s not that complicated. When you want to cross the street, look to the direction where the vehicles are coming from. I’m not saying “look to the left” on purpose. You should focus on the left, but also be aware of other directions because going against the current or appearing out of nowhere without clearly signaling is quite common in Vietnam. Just move forward at a slow, regular pace, DO NOT run or move back unless you want to die. I should point out that they don’t use brakes very often, so don’t try to show off and stop a car, because it won’t work. You might be terrified at the beginning, you might feel like screaming “what the f*** are you all doing?!”, but then you’ll get used to it and discover some order in the chaos. Because somehow it works. Until it doesn’t 😉

“Let’s go on a bridge”- I heard once from my friend. Since I consider every idea a good one, a few minutes later we were standing on a bridge and watching the traffic during the rush hour. I would say it’s one of the must-dos in Hanoi. You wonder why? There are about 4 million motorbikes in the capital, cruising among cars, buses and trucks, thinking that they are kings of the roads and nothing can stop them. The general rule is: if your vehicle is bigger, you have the right of way. Surprisingly, people don’t even stop when there is a minor accident (read: not fatal). Cars just drive away not caring about damages caused, others  stand up from the street, dust themselves down, pick up their motorbikes and peacefully and gracefully and continue their adventure.

People change lanes all the time, use their horns loudly without any particular reason, try to find a small space to squeeze through, go in the opposite direction, pass through red lights, and, besides that, they are so colorful. When the sun comes out, ninjas appear on the streets. J Asian people consider pale skin beautiful (logically, our sun-burnt skin is ugly for them), hence, they cover up their bodies as much as possible in order to protect their skin against the sun. So for the summertime they wear special coats covering their legs, hands (the sleeves are prolonged) and heads. They also wear masks covering almost the whole face, so actually all you can see under these layers of clothes are their eyes. Hello Kitty or Pokemon helmets just perfectly complete the whole picture. Moreover, what you can see on these motorbikes except the people is another mysterious story. Sometimes you can’t notice a driver because they are surrounded by windows, ladders, hundreds of balloons, or pigs.

Usually it looks as if it will all instantly fall on you if you’re behind, because they don’t care that much about safety. A stack of things on one bike is tied together with a little piece of, not very tough, string, and it may just snap at anytime. That’s probably why nobody is surprised to see three people on one moped. Four is also very common. Five starts to generate some emotions like admiration and curiosity: how did they manage to do that. Observing this wide spectrum of colors, designs and strange stuff might be quite impressive and entertaining. 😉

Some people find traffic in Vietnam terrifying, but I can’t imagine this country without it. It just makes this amazing chaotic, atmosphere. And you have to try riding a motorbike in Hanoi or Saigon, otherwise you won’t know what Vietnam is. You will visit it, but you won’t experience it. Good luck! 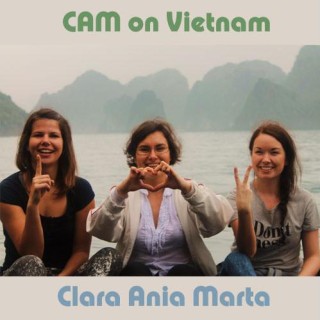 Why Cam on Vietnam? 1. We have many reasons to thank Vietnam and Vietnamese and this is a great place to share them (= CAM ON means thank you in Vietnamese) 2. As the main purpose of our blog is to write ON this lovely and at the same time crazy country and our initials goes as Clara, Ania and Marta (= CAM ON stands for Clara, Ania and Marta on Vietnam) Why three strangers in Vietnam decided to make this blog? Each of us came to Vietnam because of the same reasons although we didn't know one another. We ended up as volunteers in the same organisation and, what's more, in the same room. The most undecisive, messy but at the same time adventurous girls from Slovakia and Poland trying to do something good for Vietnam, but actually slowly realising that it is Vietnam that helps them. Cam on Vietnam !